Dr Treasa Creavin shares her perspective on developing and applying a gender balance policy for Advanced Courses and Scientific Conferences.

Gender issues in science, research and the wider world have been under close scrutiny in recent times – most recently due to the legal requirement to report gender pay-gap data in the UK this year. The ‘leaky pipeline’, well-known in academia, describes a situation where men and women are represented equally at undergraduate and PhD level in the biomedical sciences, but where there are fewer females in academic research at the more senior, professorial level. The reasons why women leave academic research are many and complex. Are women less attracted to academic research because of a specific organisational ‘culture’ in academia? Or is the timeline for progress and promotion to a permanent academic position not conducive to family life? Recent research has shown that identical CVs with male names were rated more highly and more likely to be hired than those with female names [1]. Several studies have shown that female teachers or lecturers are rated lower than their male counterparts, leading some to suggest that these type of evaluations are a better measure of implicit bias than of teaching quality [2].

This general pattern is reflected at many scientific conferences, with a majority of male programme organisers and invited speakers. Although the highlighting of all male panels and active calling out on social media (follow the twitter hashtag #YAMMM for some examples and reactions) shows this is becoming less acceptable for the community.

Previously, Wellcome Genome Campus Advanced Courses and Scientific Conferences (ACSC) hadn’t mandated a set number of female speakers, although we encouraged scientific organisers to invite a diversity of speakers and not just the ‘big names’ in the field. It is important for us to consider the rising stars, and the next generation of researchers, and to give them an opportunity to present their work at our conferences. This increases the visibility of their research, and allows them to gain from the extensive networking and other opportunities associated with being an invited speaker at an international meeting. Across our conference programme in 2015/16 our average percentage of invited female speakers was 34% – although this varied across specific fields and meetings (for example, we achieved 50% female speakers at The Biology of Regenerative Medicine, but only 21% at Genomics of Common Diseases). However, it’s true to say the committees on the whole found it easier to suggest male speakers and often struggled to suggest female speakers, suggesting that male scientists are more ‘visible’ to committees than females. Potential male and female speakers were also not evaluated in the same way, with some committee members often more willing to give a male scientist an opportunity to speak, but seeking reassurance that a particular female scientist was a good speaker before a similar offer would be extended, reflecting unconscious bias.

In November 2016, ACSC adopted a new policy of mandating that 50% of our invited speakers be female – in order to bring gender balance to our conference programme.

As the funder and organisers of an internationally-recognised conference and courses programme, we thought it important to take a lead on this issue.

Given that our audiences were approaching gender parity, we thought that those on the stage should reflect the community sitting in the seats. We also wanted to open up more speaking opportunities to female researchers, and play our part in encouraging them to stay in research.

The reaction to this new policy from our conference programme committees varied. Several committees were completely supportive; taking the policy on board by suggesting female speakers, and being very pro-active in ensuring slots for female speakers were considered first to ensure we achieved our quota. Others were more challenging – expressing concerns such as there “not being enough women in senior positions, junior women can reduce the credibility or quality of the meeting”, “…most professors of X are male, by inviting more females we’re discriminating against men”, to the fact that our new policy was “putting too many constraints on speaker choice”.

Other conference organisers will be familiar with the many excuses – Spot your favourite from the selection in the table below! 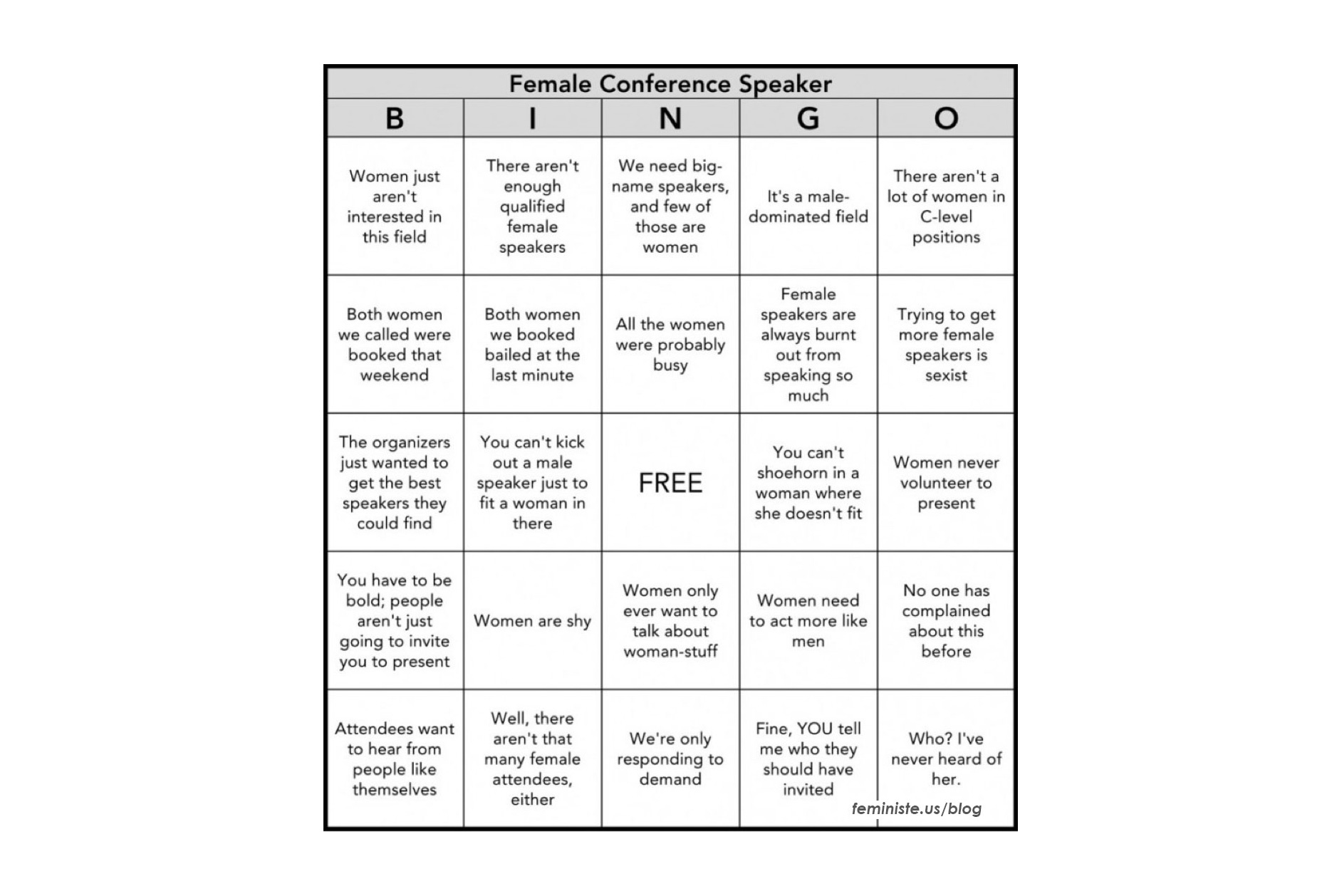 We certainly had lots of lively conference calls when putting various conference programmes together, as we encouraged committees to stay on track with gender balance! However after 18 months of discussions and deliberations, we have achieved our 50% target across the conference programme.

Indeed for the majority of our committees, gender balance is now firmly on their radar and they are much more forthcoming in making suggestions for female speakers and considering diversity when putting a scientific conference programme together. However, when a female speaker cancels within a couple of months of a conference, some committees revert to type by thinking they could not possibly get another female to fill in with such short notice.

Since our meetings have hit our gender balance goal, delegate feedback from those attending has remained consistently positive, and registration numbers stayed stable.

So what lessons have we learned?

This is a real achievement for ACSC as addressing gender bias at conferences is an important step in increasing the visibility and careers of talented female scientists, benefitting research as a whole.

We’re always looking for new opportunities to continue to support women and men in science, and we have recently introduced our carer grant to support childcare, or extra care costs for dependents, while delegates attend one of our conferences or courses. We’re now also rolling our gender balance policy out to the courses side of the programme, and are looking forward to applying our experiences and learning.